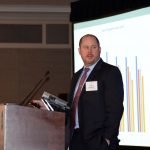 A recession might be looming, economists say, but Maryland Board of Revenue Estimates Director Andrew Schaufele believes the state’s close ties to the federal government and the end of the federal sequester budget cuts in 2021 could buoy the state’s economy.

During a panel discussion at Tuesday’s Greater Baltimore Committee meeting, Schaufele cautioned business leaders that he does not as a rule forecast economic recessions. However, Maryland’s economy did fare better than the rest of the country during the Great Recession after the housing and financial crisis in 2008, Schaufele said.

“This is typical,” he said. “We never rise as fast or fall as far.”

That’s because the federal government historically has been one of the state’s top employers, with federal workers’ salaries averaging about $105,000 a year, Schaufele said.

Read the complete story at baltimoresun.com.