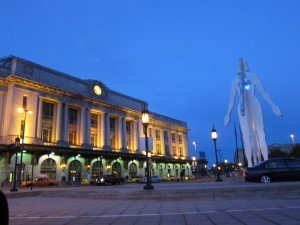 Editor’s note: The following commentary appeared on TheDailyRecord.com on April 15, 2016.

When it comes to customer traffic for rail service, Baltimore’s Penn Station sits pretty high on the list. In fact, it’s the eighth-busiest in the Amtrak network with about 1.1 million riders a year coming and going from the station, many of them commuters shuttling between Baltimore and Washington, D.C., and other stops along the Northeast Corridor.

But as many of these train riders might tell you, the century-old station isn’t a place anyone wants to spend a lot of time in these days.

If you haven’t been in Penn Station recently, it’s a bit on the neglected side.

There are some tired old wooden benches to sit on and wait for a train, and a small shop or two to get a newspaper or a hot cup of Joe. The top floors of the Beaux-Arts style building are home to little more than dust and a few spiders. The scene outside the main entrance at any given rush hour can be congested to say the least. There’s little room for the throng of cars, taxis, shuttle buses, and people trying to maneuver around a half-moon drive. Hardly the picture of a modern rail station.

So it was good to learn this week at a joint meeting of the Greater Baltimore Committee’s Transportation & Mobility Committee and Economic Development Committee that Amtrak plans to move forward in the not-too distant future with requesting bids from private industry groups interested in serving as a “master developer” for the station and the adjacent land parcels Amtrak owns.

These parcels – 37 acres total — are a bit carved up. Some sit adjacent to the station while others don’t. But they still represent a lot of opportunity.

Earlier this year Amtrak officials told a congressional committee that they’d received nine responses from private entities to a request for information it issued. This was essentially a way to test if there’s serious enough interest in a project that could one day result in legitimate bids.

Amtrak hasn’t disclosed the identities or any specifics of the nine responses it received. But this early strong interest hopefully bodes well for the future.

The private entity selected as the master developer for Penn Station would be hired to bring innovative design and other thinking to the project. This hopefully will include retail, dining or other amenities to brighten and enliven Penn Station.

This of course is good for the city if it can play out as hoped by the business community and elected officials at the local, state and federal levels.

This isn’t the first time Amtrak officials have said they understand Penn Station needs attention and they honestly want to get a project going to give it some new life.

But the talk has always seemed to come to naught, and so one can only hope this latest effort isn’t just another clever way to kick the can down the road again.

The Greater Baltimore Committee has been urging Amtrak for a number of years to upgrade and improve Penn Station and the surrounding Amtrak-owned property.

Baltimore is fortunate to have a forceful cheerleader in Congress, U.S. Rep. Elijah E. Cummings, who is solidly behind this effort.

Upgrades and improvements to Penn Station are long overdue.

Amtrak is in the business of rail transportation for commuters and travelers. It doesn’t have expertise in real estate development and operations that do more than serve as a place to get on and off trains.

And so hiring an experienced master developer who can deliver new ideas about design, construction, financing, and operations seems like a smart move.

The public-private partnership concept holds the potential to create a modern, welcoming Penn Station that would serve as a transit hub worth talking about and spur further development in the up-and-coming surrounding areas.

For those skeptics who doubt a grand project holds much potential, a successful project that resulted in a renewed and lively Union Station in Denver may serve as testament that Baltimore’s Penn Station could one day be a showcase for the city.

There’s enormous potential and opportunity in Penn Station and the associated land parcels if you consider its location.

The bustling University of Baltimore and the Maryland Institute College of Art are just down the street, and the emerging Station North Arts District is around the corner.

Improvements to the existing Penn Station and the appropriate development of the nearby Amtrak-owned land sites would serve as a further economic boost to this area of the city and vice versa.

They plan to release more details after they update city and state transportation officials later this month.

Now is the time for state and local elected officials, the regional business community and the many employees who rely on Amtrak and MARC rail service moving through Penn Station to let Amtrak know they support improving Penn Station and fully leveraging the potential in Amtrak-owned real estate nearby.

Along with voicing that support, business leaders and elected official should make it clear they expect Amtrak to make this a priority project that actually gets started in the next three to five years, rather than kicking it down the road again.

Donald C. Fry is president and CEO of the Greater Baltimore Committee. He is a regular contributor to The Daily Record.