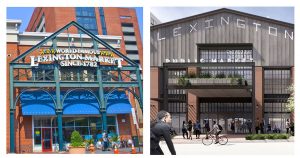 Even as vertical construction on a new $40 million Lexington Market building is expected to begin shortly, builder Seawall Development continues to adapt to changes caused by the COVID-19 pandemic.

Seawall told city business leaders during a Greater Baltimore Committee Newsmaker event August 20 that the new building’s foundation is complete, which sets the stage for the company to start assembling the structure’s frame.

“It’s a big milestone, because we’re going to start coming out of the ground,” said Jon Constable, Seawall’s development manager.

Despite construction work starting only weeks before the COVID-19 outbreak in the U.S., Constable said, the new building is on pace to deliver in early 2022.

“The virus has not slowed us down from a construction standpoint. We’ve had a little more trouble with the rain,” he said.

Peter DiPrinzio, Seawall’s director of food and beverage, said that during the market’s 238-year history it has survived pandemics and fires. The new version of the market, he said, will also outlast the COVID-19 pandemic.

As a result of the disease’s outbreak, however, the hospitality sector has been hit hard. In a bid to help tenants weather future outbreaks as well as deal with disruptors like online food ordering services,  Seawall is emphasizing outdoor plaza seating, carryout windows, and “a robust digital infrastructure.”

“We do realize the pandemic’s forcing business, especially food and beverage, to make changes,” DiPrinzio said.Members of the development team also stressed the role of the new market in improving the surrounding community.

Thibault Manekin, who founded Seawall with his father, Donald Manekin, said his father told him stories about taking trips with his own father to the market via trolley.

“You literally didn’t start your weekend unless at some point you were at Lexington Market,” he said.

Pickett Slater-Harrington, who heads Seawall’s community outreach efforts for the market, said the goal is for Lexington Market to serve as a community wealth generator.

“This will be the largest small business incubator that Baltimore has ever seen,” Slater-Harrington said.

During the presentation Manekin asked Greater Baltimore Committee members to consider supporting the fund.“Inevitably there’s going to be a gap between $25,000 and $75,000 that these businesses are going to struggle to access,” Manekin said.

To read the complete story, visit The Daily Record website.