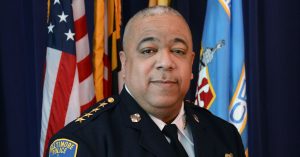 Baltimore City Police Commissioner Michael Harrison May 26 cautioned that calls for defunding or dramatically reforming the police department need to be tempered with realistic expectations about how to maintain important services and improve public safety.

Harrison said the public has been conditioned to call police for every issue, including mental illness, addiction and homelessness. “We have been asked to be all things to all people,” he said. “Over the decades we have been just responding to everything in the absence of all the other disciplines that should have always been responding but have not been there or not there in full.”

He said he agrees with calls to redefine which services police provide, noting that there are other professions better equipped to handle public health issues.

“We are trained to be police officers not necessarily psychologists or social workers or some other discipline,” he said. “The question is how do we take money away from a department without reducing its manpower and cutting positions that are desperately needed when we are desperately short of people — over 200 to be exact?”

This week marked the one-year anniversary of the murder of George Floyd. After cellphone footage of Minneapolis Police Officer Derek Chauvin kneeing on Floyd’s neck emerged, people across the country protested for weeks to demand racial equity and social justice. Many have called for major reforms in policing techniques, including the use of force by officers.

Maryland legislators in the 2021 session approved a series of reforms to policing and police oversight.

Harrison made his remarks on a wide variety of public safety issues as part of the Greater Baltimore Committee Speaker Series. GBC President and CEO Donald C. Fry served as moderator, asking questions of Harrison and posing ones offered by the online audience.

When discussing defunding police, Harrison said, he believes the question is not yes or no but rather how and when. He likes to use the analogy of building a baseball stadium.

If the discussion is about how and when to transfer services from police, Harrison said, no other agency is equipped to do so right now to include staff, geography reach and infrastructure. “We don’t want to hand off something to somebody that is not ready to handle it or something that is not even built or in existence yet,” he said. “So it is about building that up over time and as we do that, analyzing how the department can make the transfer.”