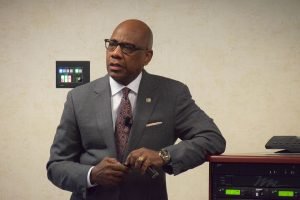 Wilson is in his tenth year as Morgan’s president and spoke to business leaders about what he has done and what he plans to do to make the university and its students more competitive on a global scale.

Two years ago, Wilson and the university announced that it would raze the plaza as part of a $50 million redevelopment project. That project will include a Barnes & Noble university bookstore, the home of the university’s police department, a Lidl and other private development.

Redeveloping Northwood Plaza has been one of the most difficult projects of Wilson’s career — he found himself at a loss for words on Feb. 19 trying to describe frustrations with how long it took and the complexity of the project.

It is one of several projects in the works to make the main gateways to the university attractive, he added.

2. Making talent attractive to Silicon Valley, but not forgetting Baltimore

Wilson touted work that the university has done to place students with high-profile technology companies, including Google and Facebook.

Morgan partnered with these companies offering students things like internships or, in the case of Google, letting students spend their entire junior year working and studying there.

These types of programs were formed as these Silicon Valley firms looked to diversify their workforces.

But some business leaders in the room Wednesday questioned whether enough was being done to help retain some of Morgan’s talent in Baltimore.

“That’s the way to introduce the talent early on to that particular business, and then you get to understand the culture and the expectations. And then that company gets the opportunity to assess that talent,” he said. “I think both of us (Morgan and the private sector) have fallen short in this area.”

Morgan has increased its collaborations with some high-profile universities, including the University of Pennsylvania’s Wharton School. These collaborations are about demonstrating how each school can be helpful to the other, Wilson said.

The university has also sought to expand its reach to a new continent as it prepares for the number of overall university applicants to dwindle in the United States.The school announced that it has begun offering programs in Africa.

4. A medical school and a lawsuit

Wilson also offered some updates on a couple of recent issues for the university.

He said that the university and Salud Education, LLC continue to do their due diligence as they work toward bringing a for-profit medical school to the campus.

“We are moving forward now, continuing to do due diligence as we enter into a partnership with a private entity that will build a medical school on our campus,” Wilson said. “They are bringing all of the capital to the table and Morgan will actually contribute zero dollars to that project. We will actually then lease back to them services that they would need from us: technology services, etc., etc.”

And, in response to a question, Wilson said he does not put any effort into the ongoing litigation over state support for its historically black colleges. That litigation was brought by alumni of the institutions, not the schools.

Wilson said he cannot opine on the litigation as the president of one of the universities, so he does not let it distract him.

To read the full story, visit The Daily Record’s website.