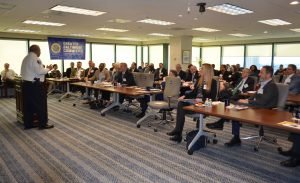 Baltimore Police Commissioner Michael Harrison sought to reassure business leaders that police are making inroads into reducing the violent crime that has wracked the city for the past five years on March 4.

During an appearance at a Greater Baltimore Committee-sponsored event, Harrison stressed that police are focused not only on reducing homicides that have exceeded more than 300 each of the past five years but on combating lower-profile crimes as well.

For instance, he noted, the department is seeking to reduce problems associated with “squeegee kids” who wipe the windows of cars stopped at traffic lights.

“It’s an issue that, like murder, has deep-rooted causes that drive young men to do that,” Harrison said. “In many cases, they’re caring for their own homes, sometimes as teenagers, and we’ve found they’re out there making two, three times what they could in jobs available to them.”

During Harrison’s presentation, which summarized the department’s five-year crime reduction plan, he said the department is close to implementing a new program to deter homicides, which he described as a “carrot-and-stick” method where police and other agencies use a variety of resources to steer people away from crime.

Since he took over, Harrison said, most crime rates other than homicides – which went up from 309 to 348 between 2018 and 2019 – have decreased, including robberies, burglaries, rapes, arson, car break-ins, and thefts.

At the moment, Harrison said, the department is short 350 officers.

In an attempt to fix that, the department restructured its officer training program so that it takes four months instead of a year for recruits to be trained, Harrison said.

Aside from changes to the department itself, Harrison said, a major part of the plan to reduce crime hinges on improving relationships between the community and the police. He said he appreciates the philanthropic assistance and expertise that local businesses have offered him.

“I need help figuring out how to change their thinking, so we run this 3,500 (employee) organization much like you run your excellent organizations,” Harrison said.

To read the full story, visit The Daily Record’s website.