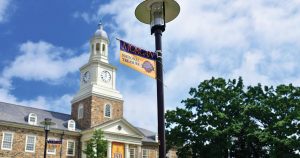 Calvin E. Tyler Jr. grew up in what he recalls as “very humble beginnings” in Baltimore, went to Morgan State University in his home city in the early 1960s, left school without finishing his degree for want of money, became a driver for United Parcel Service, jumped into management and retired in 1998 as senior vice president after a long and successful run with UPS.

Then he and his wife, Tina, started giving to Morgan State in what has now become a landmark run of philanthropy for the nation’s historically Black colleges and universities.

“I wanted to make it possible for a lot of kids from the inner city to go to college on scholarships,” Tyler said.

On Feb. 22, Morgan State announced a new pledge from the Tylers of $15 million. Their lifetime total now stands at $20 million. All will be dedicated to financial aid, with a goal of helping students graduate with little or no debt.

What sets these gifts apart is the source. The $20 million appears to be one of the largest total pledges that any historically Black school has received from a former student (and, in this case, a spouse).