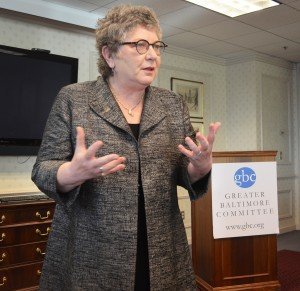 Towson University President Dr. Kim E. Schatzel talked about how the institution has evolved in its 150 year history.

“The breadth and the scope of the programs and the academic excellence is just tremendous,” she said.

President Schatzel made her remarks to more than 50 Greater Baltimore Committee members at the GBC’s Newsmaker Breakfast series event on March 17.

The University System of Maryland Board of Regents appointed Schatzel as the 14th president of Towson University in December. She officially began her term in January.

At the GBC event President Schatzel focused her remarks on how her background in business has prepared her to lead the institution and the future of higher education.

President Schatzel began her career in higher education in 2000 and held several positions in the College of Business at the University of Michigan-Dearborn, beginning as an assistant professor of marketing and rising to interim dean and dean. As dean, she led the business college to reposition itself within a highly competitive market, leading to enrollment growth and enhanced ability to attract and retain outstanding faculty.

She also brings more than 20 years of corporate, new venture and start-up experience to Towson University, including serving as founding president and COO, and later as CEO of a multinational industrial firm with more than 1,500 people on four continents.

“It informs a lot of what I do in my role,” said President Schatzel, who earned a Ph.D. in marketing and management of technology. “I am thrilled with the opportunity to lead Towson University.”

“In 50 years that’s a tremendous conversion of the institution,” she said.

Furthermore, the overall business model of higher education has “completely changed” in the past 15 years, President Schatzel said.

Fifteen years ago higher education institutions received the majority of their funding from the state. Today that figure is around 25 percent, she said. The remainder of the funding comes from a tuition and enrollment-driven model.

“There has been a significant disinvestment in public higher education,” President Schatzel said. “That model changes how we manage.”

In addition, the profile of today’s student has changed.

“The single largest determinant of their success in college is access to affordable child care,” said President Schatzel, who noted Towson University has a child care center on campus. “It’s surprising to realize because in our minds we think of the 18, 19-year-old undergraduate when in fact it’s much different.”

In addition, 40 percent of students arriving on college campuses today have behavioral health issues, she said.

“Forty percent are taking some type of behavioral health psychotropic drug,” she said. “And I want to remind you that four years later they’re going to be arriving at your place of employment.

“It’s a much different population than we saw 20 years ago,” President Schatzel said. “Those students are moving through our pipeline and they’re entering your pipeline.”

Connecting with the business community

Under President Schatzel’s leadership the institution is working to develop a closer connection to the business community.

She announced the university is creating a virtual portal – the Baltimore-Towson University Initiative or BTU – to allow the community, individuals and departments to take advantage of the institution’s expertise and experience. They will be able to search and find resources and indentify initiatives already in place. President Schatzel hopes to launch the portal later this semester.

“What I’m looking to do is leverage a lot of the initiatives that we have to be able to broaden their impact as well as to increase their breadth and scope,” she said. “Being able to provide those types of partnerships is going to be something we’re very excited about doing.

“We are going to work with and for Greater Baltimore and be able to lift it up and partner with the business community as well as not-for-profits in this area,” she said. “We are very excited about doing that and we really look forward to being able to continue the conversation on it.”

The GBC’s next Newsmaker series event is with Maryland Transit Administration Administrator Paul Comfort on Thursday, April 21, 2016. Learn more and register to attend.