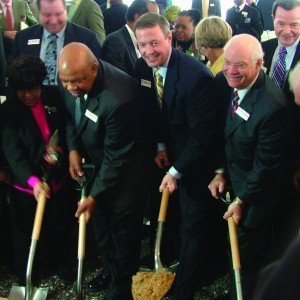 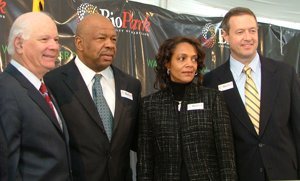 More than 300 business and government leaders joined the community and campus on March 31 to celebrate the growth of the University of Maryland BioPark with the opening of Building Two and the launching of Building Three.

The themed celebration, “Watch Us Grow – in square feet, community impact, and in bioscience collaborations,” was held under a tent in the center of the BioPark.

“This marks another milestone in the accelerating growth of Baltimore’s bioscience industry,” said GBC president and CEO Donald. C. Fry.

The Greater Baltimore Committee continues to make the emerging bioscience industry in the region one of its top long-term priorities.

“We are now ranked third in the country for biotech firms and third in the nation for research and development,” said Maryland Senator Benjamin Cardin.

Located at the gateway to the UMB Biopark with southeastern views towards Baltimore’s Inner Harbor, Building Two is a loaded lab and office building that includes conference facilities and space suitable for manufacturing. The building is six stories totaling 215,000 square feet with a design to accommodate a range of occupancies from full-floor office and laboratory to smaller users.

Tenants for Building Two include the new Institute for Genome Services and Paragon Bioservices Inc., which is expanding from the Johns Hopkins Bayview Research Campus.

David Ramsay, president, University of Maryland, Baltimore, announced a new partnership with Baltimore City Community College and Vivien T. Thomas Medical Arts Academy during the celebration. The BCCC Life Sciences Institute will take up about 38,000 square feet in the second building and could train about 200 students a year. 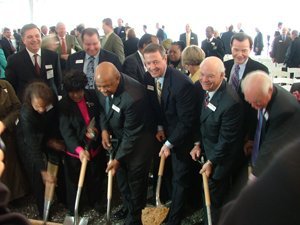 This project was made possible through an effective and very important, successful relationship with the community, said Jerry Smalley, chairman, UMB Research Park Corporation.

According to James R. Berens, president of Wexford Science & Technology, which developed Buildings One and Two, the UMB BioPark project has received over $130M in private funding and will exceed $200M when Building Three is finished.

“Maryland’s future is going to depend on what we’re doing here and now,” said Maryland Governor Martin O’Malley.