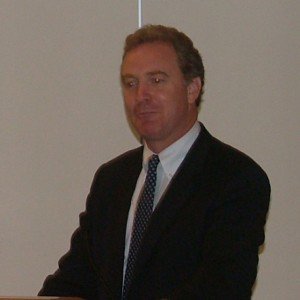 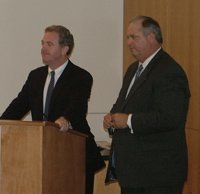 The state of Maryland is well positioned to move forward in the bioscience industry and to compete at a national level, said Congressman Chris Van Hollen. “We need greater cross pollination… and to create opportunities for symbiotic relationships.”

More than 300 bioscience companies are located in Maryland, Van Hollen told GBC members at a Bioscience Speaker Series lecture on July 18. More than 25,000 jobs relate directly to the biotech industry. The state is supportive, but should continue to strengthen such tools as tax incentives, investment of private funds and the construction of research parks, he said.

There was a rapid increase in National Institute of Health (NIH) funding over a five-year period leading up to 2003. Since 2003, Maryland has seen a decline in NIH funding, Van Hollen said. Consequently, young and eager life science companies can’t get into the market because the grants just aren’t there, he said.

An efficient U.S. Food and Drug Administration’s (FDA) review and approval process is essential to the bioscience industry. “We need to make sure we have an entity that can move forward in processing,” Van Hollen said, noting exiting long lead times for drug approvals.

The FDA proposed recommendations to Congress for the next reauthorization of the Prescription Drug User Fee Act (PDUFA) program which significantly broadens and upgrades the agency’s drug safety program, increases resources for review of television drug advertising, and facilitates more efficient development of safe and effective new medications for the American public, he said. The House also proposed increasing FDA funding by 7.7 percent over the FY 2007 funding.

Meanwhile, the Small Business Administration (SBA) is redefining the Small Business Innovation Research (SBIR) program’s procedures, a set-aside program (2.5 percent of an agency’s extramural budget) for domestic small business concerns to engage in research and development that has the potential for commercialization.

“At a national level, stem cell research, that unfortunately the president vetoed, should be made part of the next presidential debate,” Van Hollen said.

In addition, workforce development is key in stimulating economic growth. An innovation agenda has been developed on a federal level to help create a premier science, engineering, technology and mathematics workforce, he said. Congress passed a bill to provide scholarships to students and incentives to get more qualified teachers in the classroom. It’s very competitive in math, science, and engineering in terms of salary, so the gap between the industry professionals and teachers needs to be narrowed a bit, he said.

“We have such great assets in Maryland and are very well poised for whatever challenges are made at a state and federal level,” said Van Hollen. “So investment in NIH, FDA, and tax credits is continuously important.”

Van Hollen (D-Md.) was designated Legislator of the Year in 2007 by BIO, the industry organization for the bioscience industry. In making the award, BIO cited Congressman Van Hollen’s promotion of biotechnology research and development as a co-sponsor of the Stem Cell Research and Enhancement Act as well as the Pandemic Preparedness and Response Act.