Striving to improve outcomes for returning citizens with criminal backgrounds, the Greater Baltimore Committee (GBC) convened the Coalition for a Second Chance, bringing together experts from the nonprofit field, the business community, social service providers, governmental officials, and other stakeholders and recently releasing the report, “Opening Doors to a Second Chance.”

Vehicles for Change, an implementation partner of the Coalition, is a nonprofit organization that accepts donated cars, repairs them while training ex-offenders to become automotive mechanics, and awards reconditioned cars to working, low-income families.

In 2015, Vehicles for Change opened the Full Circle Auto Repair and Training Center to provide a full-service garage, where automotive interns receive hands-on training before being placed in full-time employment opportunities.

Christopher White is an ex-offender and former Full Circle automotive intern who has truly come full circle. And he has earned the keys to prove it!

From the time he was five years old, Chris spent time working in his grandfather’s auto repair shop—first cleaning and then learning how to fix cars under the longtime mechanic’s watchful eye. But his grandfather, known as Big Herb, lost faith when Chris started getting in trouble with the law. 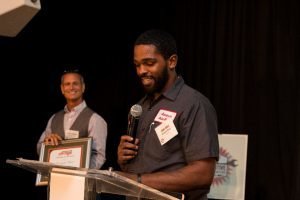 After serving his five-year sentence, Chris White came to Vehicles for Change, having received information about the new auto repair shop that would be opening up and providing hands-on training for returning citizens. At 25 years-old, White was the youngest in Full Circle’s first group of automotive interns.
Chris set high expectations for himself from the time of his release. His primary goal was to make an honest living so he could be an active part of his daughter’s life. This was extremely important to him, since his incarceration began when his little girl was only three months old. White also had a desire to, someday, take over to own and operate his grandfather’s shop, Herb’s Car Care in Baltimore City.

“More than one in four adults in the United States—roughly 70 million people—have an arrest or conviction that appears in a routine criminal background check.”

White worked hard and became a leader in the automotive internship program. He was hired part-time at Vehicles for Change before moving on to full-time work with Antwerpen Auto World, where he has been employed since 2015. A generous soul, White has not forgotten about how the program helped him and has always been willing to reach back and share his experience with upcoming Full Circle interns. In 2016, White was honored as Vehicles for Change’s first Intern of the Year at its Best of Automotive Service Awards.

While Big Herb’s attendance at Full Circle’s grand opening event was an encouragement to his grandson, it wasn’t until he recently handed over the keys to the garage that Chris felt that he had earned back his grandfather’s trust.

Although he has not taken over Big Herb’s automotive garage just yet, a very significant bridge was crossed when this former Full Circle intern earned his keys and is now able to do after hours work at his grandfather’s garage. Chris shared, “My Grandfather told me when I came home, ‘You gotta’ earn your key.’ That’s not the only key I’ve earned, but it definitely means the most to me.”

According to the National Employment Law Project, more than one in four adults in the United States—roughly 70 million people—have an arrest or conviction that appears in a routine criminal background check. The GBC Coalition for a Second Chance is working hard with our members and partners to change the employment outlook for Maryland’s returning citizens, like Christopher White.

For more information about the GBC’s Coalition for a Second Chance or to read the “Opening Doors to a Second Chance” report, visit Publications and Reports.

To learn more about Vehicles for Change or the Full Circle Auto Repair and Training Center, visit www.vehiclesforchange.org.