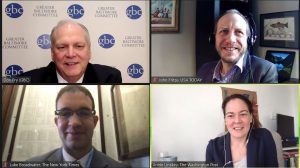 On February 10, 2021, The Greater Baltimore Committee hosted GBC Newsmaker Speaker Series: Power Shift in Washington — A View from the Press.

Top journalists covering Washington politics shared their observations and insights about how the power shift in Congress and the White House may play out on policies and proposals to address the COVID-19 pandemic, the economy and more.

Here are some highlights from the discussion:

On the current dynamic:

“It’s a super interesting time to be talking about this stuff,” said Fritze, who relayed a story about the way Trump responded to questions about the two-state solution. “A hallmark of [Trump’s] presidency was his unpredictability. His supporters would say that was a strength of his … others would say it was sort of chaos all the time. What you’ll see with President Biden is a more predictable operator in The White House — for better or worse.”

On Trump’s impact on the Supreme Court:

“This is the most conservative court since the 1930s,” Fritze said. “The question is how much is Biden going to give to progressives” regarding an expanded court, a code of ethics, etc.

Fritze said it will be important to watch issues such as the environment and abortion: “Will there be some sort of chipping away at Roe v. Wade?”

“A lot of the interesting stuff that’s going to be happening will be based on regulatory changes that happen at the department and agency level.”

On the Jan. 6 insurrection:

“It was a pretty terrible day,” said Broadwater who was at the Capitol that day and got home around 5 a.m. the next morning.

Broadwater started his day interviewing people in the crowd. “I didn’t feel at the time that things were going to get out of control. Obviously, that was terribly incorrect.”

Broadwater said later there was a lot of “nervousness in the room. It was a very tense situation.”

On fractures in the GOP:

“The GOP is having a real identity crisis right now as it moves into the post-Trump era,” said Broadwater. “Many of these lawmakers were afraid for their lives on January 6. …They have a fear that if you move against Trump or the Trump wing of the party … your life could be in danger.”

On initial impressions of the new administration:

Linskey compared her time working as a Baltimore City reporter for The Baltimore Sun to covering the White House now. “One thing that is really striking to me about being in the White House briefing room is — quite frankly — how similar it is to Mayor Sheila Dixon’s weekly press conferences.”

She said she would go to every press conference and ask the same question until one day she either got a different answer to the question or no answer at all. “That is what the briefings are now going to feel like. You have to have the record of asking the questions” and one day the answer changes a bit, Linskey said. “You really have to pay close attention to the language being used.”

“People are saying that Biden might get every single one of his picks through,” Linskey said, which hasn’t happened since President Reagan. “And that is stunning.”

She noted that the picks aren’t particularly flashy or feature a lot of big names, but did suggest that Pete Buttigieg — now Secretary of Transportation — could be a rising star.

Broadwater noted that Senate Majority Leader Chuck Schumer has been doing a great job at keeping his caucus together. He is “working hard to make sure he has all the votes lined up for Joe Biden’s agenda,” Broadwater said.

Broadwater added that President Biden has also been really good at making sure he has the Senators on board and votes lined up. “One of the first things the President did was started having Senators come to the White House for meetings right away. They were extremely flattered by that.”

As an aside, Broadwater mentioned that this is a very different experience for the Senators. “These people were used to being treated like crap by the last administration.”

On Biden’s urban plans and strategies:

Linskey noted that the White House has made consistent efforts to meet with most big city mayors and would be surprised if they weren’t doing the same thing for Baltimore. “Biden is constantly reaching out,” Linskey said.

Fritze added, “What cities want from this administration is funding. Mostly funding to offset pandemic costs…community development grants, justice grants and so forth.”

On the impeachment trial and its Constitutionality:

Linskey and Broadwater praised Lead Impeachment Manager Rep. Jamie Raskin from Maryland for his presence during the proceedings. “Jamie Raskin gave a very moving presentation on the Senate floor and Trump’s lawyers did not,” Linskey said.

On the press continuing to cover Trump:

“So many people are divided on this,” said Fritze. “Depending on the hold he will continue to have, we should continue to cover him pretty aggressively. We should be devoting resources to covering President Trump because I do think he still has a pretty important hold on the Republican Party.”

Fritze wondered out loud if this impeachment will hurt or help Trump. “I don’t know the answer to that. I feel like we have a responsibility to continue to cover him. …That base of Trump supporters is still there. It would be good to know where they’re headed next,” Fritze said.

Broadwater also believes Trump should still be covered but said that means something different when it comes to the former president. “With Trump, there’s so many lies. It’s much more about fact-checking and correcting what he’s saying, not necessarily promoting what he’s saying.”

Linskey disagreed with her former colleagues. “I don’t think everything he says needs to be a headline. The context is going to be a little different.”

At the end of the program, Fry thanked the reporters for being a part of the discussion. “It’s great to have you back to some of your roots in Baltimore as journalists. It’s an exciting time to be covering all three branches of federal government.”