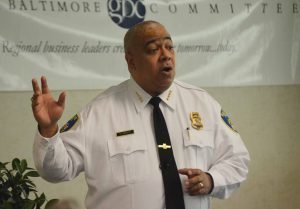 Editor’s note: The following commentary aired on wbal.com on March 12, 2019.

The Baltimore City Council is set to confirm Michael Harrison as Baltimore’s police commissioner. With his confirmation, Baltimore seems poised to enter a new era when it comes to crime, the reputation of the police department and the city itself.

For one, a city with a reduced homicide and violent crime rate, a police department that roots out misconduct and policing practices that earn the respect and trust of every resident. Achieving those outcomes will go a long way to ensure that Baltimore re-establishes a reputation as a city that is considered safe and welcoming. That’s a lot to accomplish.

But Harrison, the former police chief of New Orleans, already has impressed the business sector, community leaders and elected officials. He is thoughtful, open minded, fair, sets expectations and imposes accountability. He will bring better technology and proven best practices to crime fighting. He is universally seen as a leader with the experience and focus to restore the Baltimore City Police Department into an effective arm of the law.

Adding further to the optimistic outlook for Baltimore is Mayor Pugh’s recent hiring of Ganesha Martin as Director of the Mayor’s Office of Criminal Justice. Ms. Martin’s experience includes a stint heading up the Baltimore Police Department’s efforts to comply with the federal consent decree. She understands the complexities of law enforcement and the relationship needed with the neighborhoods.

It is important that she and Chief Harrison forge a strong working relationship. But with these two new leaders taking the stage, Baltimore seems poised to enter a new era of law enforcement.

This is Don Fry, President & CEO of the Greater Baltimore Committee.