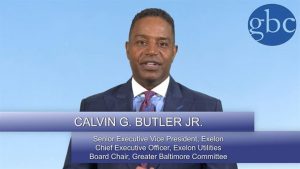 The Greater Baltimore Committee held its 66th annual meeting on Tuesday, May 18. The regional organization of business and civic leaders announced that its focus for the coming year, as its members re-emerge from the pandemic, will be “Moving Forward With Purpose.”

While the recovery remains a work in progress, this past week’s virtual meeting began with GBC President and CEO Don Fry emphasizing that it has been a challenging 14 months with multiple “shock waves” for area businesses in the form of a pandemic, crime concerns, and an unprecedented presidential election.

Donald C. Fry, President and CEO of the Greater Baltimore Committee, focused part of his speech on the GBC’s Operational Priorities and its work thus far to advance and advocate for  racial equity and social justice.

In addition to the speeches, the GBC meeting featured addresses from the Mayor of Baltimore, the County Executives of Anne Arundel, Baltimore, Harford and Howard counties, and the President of the Carroll County Board of Commissioners regarding regional unity during the pandemic.

The Annual Meeting also featured a presentation of the GBC Regional Visionary Award, which is bestowed to individuals and organizations for outstanding contributions to improving the region.