The organizing committee’s stated mission is to “Leverage World Cup activities to enhance the communities of Baltimore-Maryland for the benefit of residents and visitors to our destination. We will host events that are sustainable, promote human rights, and provide a catalyst for positive change in our city through sport. We intend to build the most scenic, welcoming, and inclusive FanFest in World Cup history.” 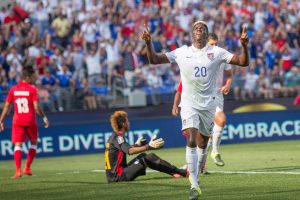 A presentation given by committee members cited several aspects that make the Baltimore region an ideal host for the event. In addition to its diverse cultural history and ethnic makeup, the committee highlighted such assets as M&T Bank Stadium, which hosted 2015 CONCACAF Gold Cup games (pictured), as well as Oriole Park at Camden Yards Sports Complex, the Baltimore Convention Center, the city’s hospitality profile and the region’s transportation network.

The committee unveiled a Maryland Sports’ TEAM Maryland initiative logo and “Are you IN?” marketing campaign. The initiative will be marketed throughout the Greater Baltimore Region and display the logo on everything from reusable bags to face masks.

FIFA is expected to announce the 2026 host cities by summer or fall of 2021. An event of this magnitude is estimated to have a $400-$600 million economic impact on a host city and an impact greater than $5 billion to North America overall. With its mix of multiple potential matches, a month-long FanFest, base and training sites, and fans from all over the world, this would be the largest event ever hosted in the region.

Among Baltimore’s selling points are:

“With its world class sports facilities, waterfront and accessible transportation, Baltimore makes for a very attractive host venue for the 2026 World Cup. Having previously hosted major soccer events such as the 2015 CONCACAF Gold Cup quarterfinals, the region has demonstrated its strong support for soccer,” said Fry in a statement. “Related events would showcase the best the Greater Baltimore region has to offer and would highlight its many cultural offerings, robust ethnic diversity and rich history. The expected boost in tourism and visitors to the city would provide Baltimore’s diverse communities with a unique opportunity to come together across all backgrounds and exhibit their joint civic pride.”

Legacy plans to help leverage the bid include:

“There is no event out there that has the bandwidth to reach every corner of a community like the World Cup can, and our plan is to ensure all Baltimoreans get a chance to be engaged and impacted by this opportunity,” said Terry Hasseltine, Executive Director, Maryland Sports Commission. “It’s our time to seize the opportunity to put our city and state on the global map through the lens of the FIFA World Cup.”

The FIFA World Cup, which takes place every four years, is the most widely viewed and followed sporting event in the world. The 2026 World Cup will be jointly hosted by Canada, the United States and Mexico – the first time a World Cup has been shared by three host nations. The  2026 tournament will be the biggest World Cup ever held, with 48 teams playing 80 matches. Sixty matches will take place in the U.S., while Canada and Mexico will host 10 games each. 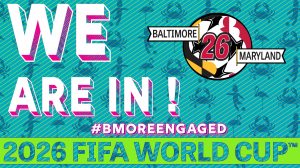 How you can get “In” on the action to bring the World Cup to Maryland:

Be Counted: Sign up and be counted to show your support
Be Supportive: Provide financial backing
United Front: Tell your story of why the World Cup should come to Baltimore
Share on social media: @baltimoremd2026 #BMoreMD2026